COMINFO turnstiles and speed gates offer security and a modern design of the physical access control system. They are beyond expectations for over 30 years of experience characterizing in the applications with high traffic of pedestrians as well as often chosed by the most famous architects for their projects. Our installation of the products in the applications worldwide includes office buildings, government buildings, bank and financial sectors, sports facilities, swimming pools, wellness and fitness centers, airports, and public transport stations, factories, etc. Our modern physical access control system provides an ideal solution to prevent the entry of unauthorized persons into your premises and ensures a reliable and long-time operation.

COMINFO specializes in developing and manufacturing data collection systems too, having hands-on training and professional expertise to ensure maximum quality and performance of the developed solution. We believe that having close cooperation between all departments right from the start is the key factor for the seamless integration of our turnstiles and data collection terminals.

Gone are the days when the word “turnstile” just referred to a three-armed, stainless steel object complete with a basic design that hardly complemented the space it was in. The situation has changed over time and nowadays, turnstiles not only serve as a functional element but also fit the bill as a design element. Their formal design and the way people pass through them have changed. Stainless steel has been replaced by other materials or coloured finishes, while a glass gate is installed in place of a “tripod” barrier.

A fresh example of this kind of entrance solution into a commercial space would be the turnstiles installed in the newly built building on Wenceslas Square in Prague: the Flow Building. In this project, we managed to combine functionality with design requirements that would not disrupt the appearance and overall architectural concept of the reception area. 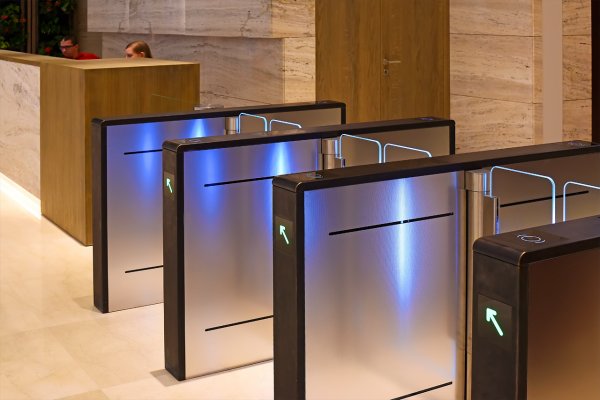 The first enquiry into whether our company would be able to supply turnstiles with bespoke modifications did not sound unusual to us – we routinely encounter specific requirements from architectural firms and try to fulfil them so long as the construction of the turnstile allows it. Because we design and manufacture our turnstiles ourselves, we offer customers the option of choosing a specific surface treatment or integrating various devices into the body of the turnstile. For the VN47 project, we received a very specific task from the architects, which made our designers feel a bit uneasy at first. 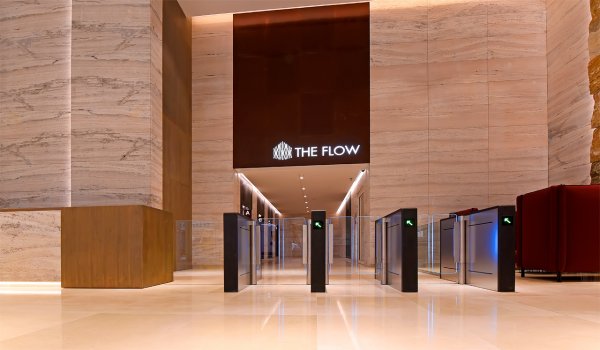 But gradually, a tangible idea of what the turnstiles should look like began to take form. And here I must thank the architectural office, who led us in the right direction while still being understanding in situations where we were unable to fully meet their requirements in terms of the internal structures of the turnstile design. Three options for the turnstile were proposed, and in the end, after a series of negotiations with the investor, one of them was chosen that would “fit right in” with the overall design of the entrance lobby of this building.

A combination of brass and steel

Patinated brass was selected as the material for the turnstile casing based on the investor's and architects’ requirements. This material, which was incorporated throughout the building and used to make a large number of individual floors, was applied to the top, front, and rear panels of the turnstile. The side panels, on the other hand, are made of patinated special steel, which you’ll also find on the interior walls of all the lifts in the building. The patinated brass-steel combination creates a very pleasant contrast of colours, while the turnstiles resonate well with the surrounding space. 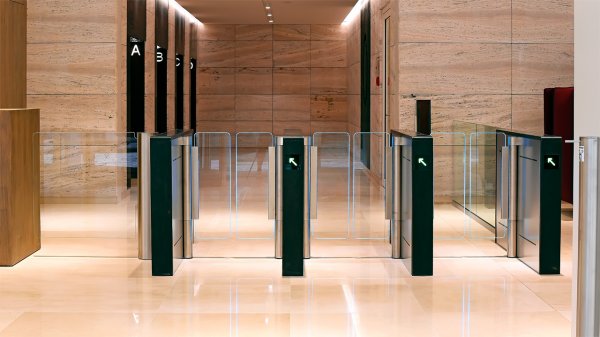 The patina used on these two materials is only recognisable when viewed up close, and this effect alone is both a captivating and astonishing sight to behold. From a structural standpoint, the materials that were used presented a real challenge, and it was necessary to know the bend radius of the materials, the thickness of the sheet metal, as well as other details. The material used for the turnstile casing was supplied by two different companies, and we can only thank them for their collaboration and approach on this project. 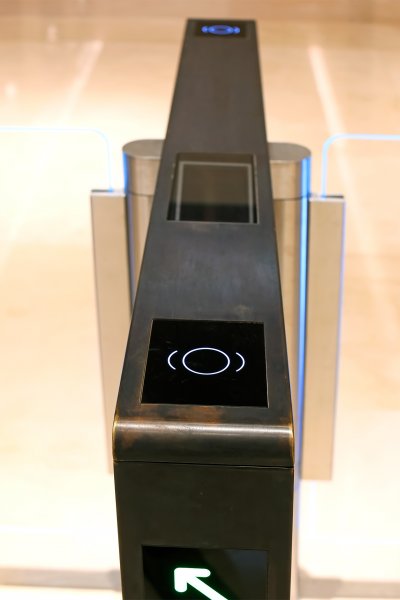 In addition to treating the special materials used for the turnstile casing as a standard of ours, we also fulfilled the investor's request to install a contactless card reader. We also came up with a solution for the increasingly popular requirement of installing a system that automatically calls the lift (specifically in this case the Schindler Port system). After a person entering the building inserts their card, the display on the top panel of the turnstile will instruct them on which lift they should take.

Additionally, the front panels of the turnstiles were equipped with an LCD display featuring a guide arrow that will direct people through. Lighting was also installed on the speed gates of the turnstiles as both a design and functional element, in which the colour of the light clearly signals whether the person is authorised to enter. When passing through the turnstile, the speed gates will light up green, while unauthorised entry attempts will see them light up red. For standby mode, the colour is set to white, which illuminates the space in between the turnstiles in an aesthetically pleasing way. 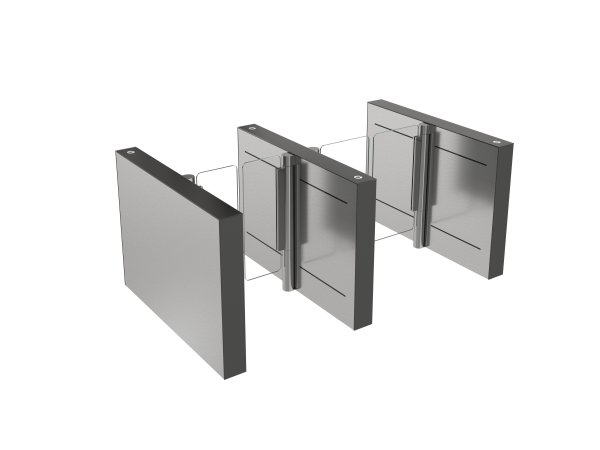 Speed gate EasyGate LC offers not only luxurious design but it is also perfectly developed for integration of lift assignment systems. The simple modern square design is now very often chosen by architects for the most beautiful interiors where this speed gate becomes a part of the interior and architect's vision.

This speed gate model is available with middle and high glass wings including a wide range of accessories.

Do you have any questions or a product inquiry? Please reach us via our contact form and your request will be forwarded to the responsible team. You will be contacted soon.