COMINFO turnstiles and speed gates offer security and a modern design of the physical access control system. They are beyond expectations for over 30 years of experience characterizing in the applications with high traffic of pedestrians as well as often chosed by the most famous architects for their projects. Our installation of the products in the applications worldwide includes office buildings, government buildings, bank and financial sectors, sports facilities, swimming pools, wellness and fitness centers, airports, and public transport stations, factories, etc. Our modern physical access control system provides an ideal solution to prevent the entry of unauthorized persons into your premises and ensures a reliable and long-time operation.

COMINFO specializes in developing and manufacturing data collection systems too, having hands-on training and professional expertise to ensure maximum quality and performance of the developed solution. We believe that having close cooperation between all departments right from the start is the key factor for the seamless integration of our turnstiles and data collection terminals.

Even modern technologies can serve as an attractive design feature, a fact that is proven by the many buildings where you will find COMINFO turnstiles installed. In close cooperation with professional architects, this manufacturer is able to satisfy even the most specific requirements for aesthetic design, while creating the perfect turnstile solution for any interior space – from historical buildings to ultra-modern spaces.

Evidence of this can be found, for example, in the entrance lobby at the National Theatre in Prague, where the matte-finished turnstiles actually help to accentuate the historical character of the surrounding space thanks to their perfectly selected profile and titanium nitride plating.

In addition to this solution, you will also find many bespoke turnstiles in the COMINFO portfolio for a number of global projects. Among them are turnstiles for a high-rise building in Sydney, Australia, which was designed by the Francis-Jones Morehen Thorp architectural design studio. The first thing you might notice about the EY Centre is its attractive “golden” façade and sculpturesque quality, which help significantly in defining the overall look of the city skyline. An excavation conducted on the site prior to the building's construction revealed a large number of artefacts from the Colonial and Victorian eras, which led the project developers to incorporate Sydney's historical heritage into the design itself. The reception and public space at the front of the building are decorated with a large-scale work of art by Judy Watson carved into sandstone, while the floors and panelling of the reception are also made of stone. 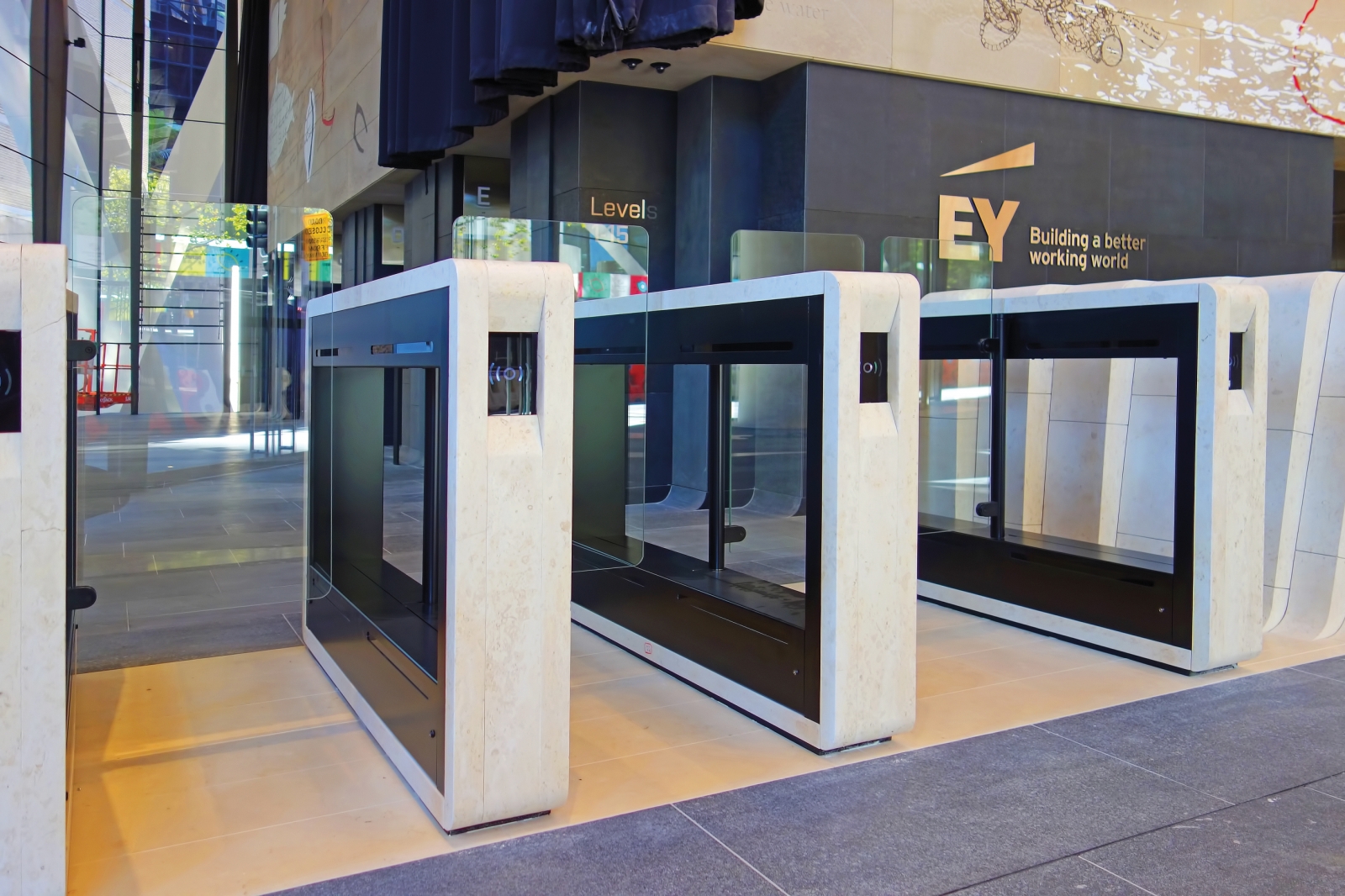 A turnstile with a stone mantle

The architects, therefore, strived to ensure that the turnstiles at the entrance also featured stone cladding, and approached Czech manufacturer COMINFO for help, as this company is one of the few of its kind that is able to fulfil the rather unusual requirements that architects often come up with. "First we made wooden templates, which helped guide us in making the stone cladding. However, no one could tell us in advance what the weight of the individual panels would be, so it was rather difficult to design the internal structural support of the cabinet itself,” reveals Ing. Tomáš Gergela, a designer at COMINFO.

The stone was imported into Australia from Italy (where the stone which was used to line the reception desks came from) and was shaped and installed right there on the spot. The architects were also tasked with designing the upper sections of the EasyGate IM turnstiles, which were to be made of several narrower strips of stone, so that they would also correspond in shape to the lining of the adjoining counters. Together, the reception and turnstiles form a single artistic element in the entire space, reminiscent of a group of stone statues.

Of all the companies that were approached for the role, COMINFO was also the only one capable of handling the turnstiles designed for the Moscow Dominion Office Building by the famous Zaha Hadid studio. The individual floors of the building, designed in a neo-futurist style, are essentially vertically stacked slabs connected by a series of staircases. Although the entire space is dominated by just two colours, black and white, the interior of the building looks very fluid. “Classic stainless steel turnstiles would have looked inappropriate in this setting, so it was necessary to design something that was simple yet imaginative, and that would blend in with the surroundings and punctuate the overall artistic expression of the space,” explains Ing. Tomáš Gergela.

The architects proposed tilting the turnstiles, which they then placed on black lines on the floor. Thanks to the fact that the lines and the turnstiles are both the same colour and width, they appear to merge into one when viewed from above. “The architects had very specific ideas in mind for the design, even down to the finer details, such as what direction to grind the brushed stainless steel finish. We had to figure out how we were going to technically achieve and incorporate these ideas,” adds Ing. Tomáš Gergela, who went on to mention that the turnstiles for this project were made in pure black, unpainted stainless steel (Rimex).

The turnstiles for both the above projects were equipped with a unique magnetic motor, which the company developed in its own development centre, and in addition to the purely aesthetic requirements, they also meet the requirements for functionality. COMINFO offers a comprehensive solution for controlled entry of people and also specialises in implementing its own attendance, access, visitor, catering, and ticketing systems.

The company also supplies terminals, contactless card readers, contactless locker locks, and card collectors. Turnstiles from this brand are able to blend in with any interior space, and thousands of people in more than 75 different countries around the world pass through them every day.

This website uses cookies in order to optimize the effective provision of services. If you do not change your cookie settings, we understand this as consent to their use.